First of its kind collaboration will see the ‘RIO 2’ movie premiere brought to life across the UAE.

Majid Al Futtaim has announced a partnership with film industry giant, Twentieth Century Fox and Empire International, their distributor in the Middle East that will see the magic of the movies brought to life like never before. The first event stemming from this first of its kind collaboration will surround the UAE-wide release of ‘RIO 2’ at VOX Cinemas, where Majid Al Futtaim’s shopping malls will host a unique and exciting program of family entertainment that will tour Ajman City Centre, Deira City Centre, City Centre Fujairah , Mall of the Emirates and Mirdif City Centre. Early discussions are already under way for Majid Al Futtaim to showcase Twentieth Century Fox’s upcoming releases, in addition to staging similar campaigns to regional markets including Oman, where VOX Cinemas is set to make its debut at Muscat City Centre and Qurum City Centre this summer.

“Majid Al Futtaim’s collaboration with Twentieth Century Fox is a strategic opportunity to engage with the international entertainment and film industry,” said Fuad Mansoor Sharaf, Senior Director – Property Management, Shopping Malls for Majid Al Futtaim – Properties. “This partnership will extend to regional markets in which we operate, further demonstrating Majid Al Futtaim’s leadership in providing unique and memorable experiences for all our guests.”

"We are very excited by our collaboration with Majid Al Futtaim, and the scale of the joint activities planned to accompany the cinema release of RIO 2 on April 10th,” said Paul Higginson - EVP, Theatrical EMEA for Twentieth Century Fox. ”As the home of some of the world's most successful animation franchises, including Ice Age, Rio and Alvin and the Chipmunks, Twentieth Century Fox are constantly looking at ways to better engage with family audiences. These innovative projects with Majid Al Futtaim in the Middle East will do just that, and help us all deliver never-seen-before awareness levels in this important and dynamic market."

As ‘RIO 2’ hits the screens, the colorful cast will also come to life as Majid Al Futtaim and Twentieth Century Fox host more than two weeks of ‘RIO 2’ live stage shows, roaming entertainment and character Meet & Greets, reaching out to movie-goers, families and fans in communities across the UAE. Furthermore, one family will have the chance to win an all-expense paid trip to New York City, to visit Blue Sky Studios, the creators of RIO and the Ice Age franchise phenomenon and discover how the magic begins.

Starting April 8th, ‘RIO 2’ will embark on its road show as follows:

“Twentieth Century Fox is one of the most innovative and forward thinking film studios in the world, and this collaboration will allow our guests to experience the magic of the movies in an enhanced and immersive way with a unique and engaging program of on-screen and off-screen entertainment,” said Cameron Mitchell, CEO of Majid Al Futtaim – Cinemas. 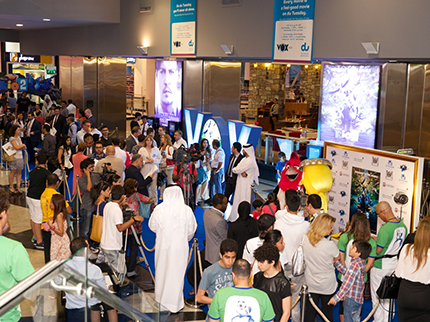 ‘RIO 2’ is a highly anticipated sequel to the 2011 animated film ‘RIO’ and features the returning voices of Jesse Eisenberg and Anne Hathaway as Blu and Jewel. VOX Cinemas hosted the exclusive movie premiere on April 8th, with the film being released to public audiences on Thursday April 10th.